The main reason I decided to publish Lisa myself was that I wanted full aesthetic responsibility. I especially needed to be behind the face of the book. So many books I love are marred by an incongruent picture that somebody else slapped on it. And this experience creates the impression that you have to go past the cover, like some kind of barrier, to get to what the author really wants to say.

This idealism led me to try to do something very, very dumb: I tried to make it myself. I yelled at Indesign for weeks and came up with this image that I am not too proud to show.

Fortunately I have a friend who is a designer, Debbie Berne. She reinforced the view of everyone else I showed the image to: no. And she had even helped me find some cool fonts for the image.

I started by tapping my way through artist’s portfolios. It seemed like every artist had a vocabulary of images, I guess you could call it a style. Then I found this picture by Adelya Tumasyeva.

It seemed like a direction I could see evolving into a cover, a vision of Lisa looking out over the Bay:

Adelya is a student at the California College of the Arts in San Francisco and was really eager to prove her art. That’s what I wanted. It was inspiring. We were both poor artists looking to find something beautiful and it wasn’t about making a lot of money.

Adelya made an incredible amount of conceptual drawings. Here are some of my favorites: 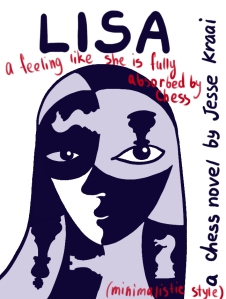 I liked all of them, but I kept pressing for something closer to the image that had drawn me to her portfolio in the first place. That’s when Adelya came up with this:

I loved it! My informal editor, Katherine Sharpe, loved it too. Maybe it was for too young an audience, but I was content, really. It was hard to believe that we could make something that much better. But Adelya kept working. 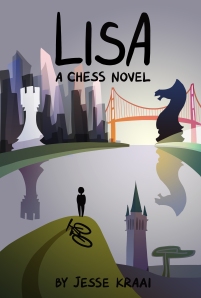 She came up with this dystopian cover that I still very much enjoy:

Katherine wanted the blue back, but I am a fan of darkness.

The real problem seemed that the space alien was not a girl. Wasn’t this the story of a young girl? Adelya tried this image:

Everyone who I showed this image to said something like “girl-power.” We considered other options, but even a pony-tail evoked this subtext. Why can’t we just have the story of a girl?

The more I reflected on the image the more sense the alien seemed to make. So many women in my life who self-identified as intellectuals had talked to me about a period in their adolescence in which they were neuter, without sexuality. Lisa has similar dreams; she’s kind of like an alien.

The grey cover seemed to work because there was a contrast between the tall modernist structures, and the playful hand-written font that seemed to suggest the Simpsons. Dystopia holding hands with a cartoon.

But Katherine wanted the blue back. She said she wanted something that would pop.

Somewhere around then is when Adelya tried out the crinkly paper effect. She said I wouldn’t like it, at first. Ha, she was right. But she had appropriately divined the theme of the journal in Lisa’s story, especially her initial disappointment in the journal. And this creates the three layers of the final cover: dystopia, hopeful cartoon and the hurtful search for oneself. And that does capture the story, as much as any image can. 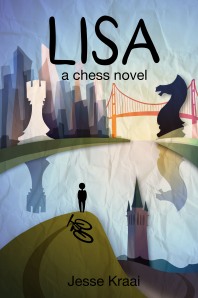 I didn’t do it by myself. It took a village. But I was at least part of it. And Debbie approved.

Get a signed copy of Lisa, a chess novel